In 1831, like nearly every standing building in Jerusalem at the time, the Tavern, located on Lot 18 and owned by Samuel Blythe Kello and Henry Gurley, was one of the larger and well-known buildings in the center of town, became a refuge and gathering place for local citizens during the Nat Turner Insurrection (arguably the most important event in the history of Southampton County).

Vaughan's Tavern, which was located on Lot 20, was also the headquarters for militia preparing to pursue Nat Turner and his followers.  Vaughan himself endured in print and in public the wrath of those he sheltered.  The Constitutional Whig newspaper of Richmond lambasted Vaughan by name over his treatment of Richmond militia and for overcharging the state for food and drink of the most base quality and poor hospitality while militiamen remained at his establishment. Mr. Vaughan submitted a bill of $800 to the state for his expenses and in doing so incurred, in the words of the newspaper, "...the severest punishment - the indignation of the public".

However, there is more to the story:  On Thursday, August 25, 1831, at 9 o'clock in the morning, the Richmond Dragoons, between 60 and 70 cavalrymen under Captain Randolph Harrison, rode into town. For six full days, the Dragoons would make their headquarters at Henry B. Vaughan's tavern and take some meals there, though they bedded down elsewhere. 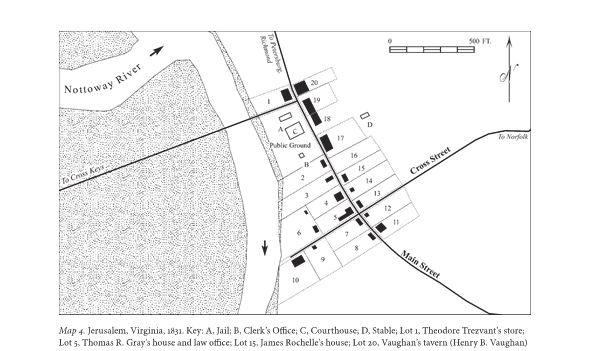 This map does not indentify what Lot 18 is which whould have been Kello's Tavern in 1831, it does indentify Lot 20 as Vaughan's Tavern which became the headquarters of the militia during the Nat Turner insurrection.

At midday, Wednesday, August 31st, after 6 days in Southampton, Captain Harrison and the Dragoons departed for home.

Three days later, from Richmond, John Hampden Pleasants, editor of the Richmond Constitutional Whig newspaper, conveyed warm gratitude for the "unremitting kindness and attention" the men had received from the ladies of Southampton.  "All the troop regrets is, that some occasion had not been offered, in which they could have manifested, by deeds, their zeal for public safety, and their devotion to their hospitable and amiable countrymen of Southampton."  He had but one sour word, concerning "one individual", Henry B. Vaughan, the tavern keeper and brother-in-law of the late Rebecca Vaughan.  The proprietor was a wealthy man, the journalist said, who deserved exposure and chastisement.  Under circumstances of the crisis, Vaughan should have charged "no more than would indemnify him" for serving the Dragoons during their time of duty; but a "base and sordid love of pelf" had prompted Vaughan to engage in profiteering.  Note: the word "pelf" is defined as "money or riches, thought of as bad and degrading".  " We tended our own horses, with little aid from his servants; did not sleep in his house; were furnished with the coarsest and sometimes, stinking food", Pleasants said.  He added that "many of the men neither ate nor drank at Vaughan's table and that on several occasions a member of the Dragoons had been absent patrolling".  The men left on Wednesday, he noted, "making the times less than five days".  For this, Pleasants said, "the landlord produced a bill exceeding $800".

Some gentlemen in Jerusalem would have responded to the insult; Vaughan did not, he only sought the amount due him.

Note: It appears Henry B. Vaughan's bill "exceeding $800" was not unreasonable considering his charges were for 5 days instead of the 6 full days the Dragoons made their headquarters at Vaughan's Tavern.

Few other properties in Southampton County associated with the insurrection still exist, such as the register-listed Rebecca Vaughan House, home of the last whites killed, Henry Vaughan's sister-in-law and her family.

The repurcussions of the insurrection are well-known and far-reaching, and as a result, the Tavern served a pivotal role in Southampton's history.

Next > Mahone's Tavern and the Civil War