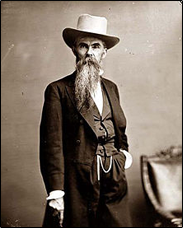 William Mahone was active in the economic and political life of Virginia for almost 30 years, beginning in the midst of the War for Southern Independence, when he was elected to the Virginia General Assembly as a Delegate from Norfolk in 1863.  He later served as mayor of Petersburg.  After his unsuccessful bid for governor in 1877, he became the leader of the Readjuster Party, a coalition of Democrats, Republicans and African-Americans seeking a reduction in Virginia's prewar debt and an appropriate allocation being made to the former portion of the state that constituted the State of West Virginia.  Mahone led the successful effort to elect the Readjuster candidate, William E. Cameron, as the next governor, and he himself was elected on the Readjuster ticket as a United States Senator in 1881.  With a 37 – 37 split between Republicans and Democrats and with a second third-party candidate willing to caucus with the latter, Mahone's affiliation would determine which party would control the Senate.  His eventual decision to caucus with Republicans came at a high price.  Despite being a freshman senator, he received chairmanship of the influential Agriculture Committee and gained control over Virginia's federal patronage, both from President James A. Garfield and by the right to select both the Senate's Secretary and Sergeant at Arms.

Once affiliated with the Republican Party, Mahone led Virginia delegations to the Republican National Conventions of 1884 and 1888 and he lost his seat to Democrat John W. Daniel in 1886.  In 1889, he ran for governor on a Republican ticket, but lost to Democrat Philip W. McKinney.  It was to be 80 more years before Virginia sent another non-Democrat to the Governor's Mansion (Republican A. Linwood Holton, Jr. in 1969).  Although out of office, the seemingly tireless Mahone continued to stay involved in Virginia-related politics until he suffered a catastrophic stroke in Washington, D.C., in the fall of 1895.  He died a week later, at the age of 68.  His widow, Otelia, lived on in Petersburg until her own death in 1911.

Although Mahone was not to live to see the outcome, for several decades Virginia and West Virginia disputed the new state's share of the Virginia government's debt. The issue was finally settled in 1915 when the United States Supreme Court ruled that West Virginia owed Virginia $12,393,929.50. The final installment of this sum was paid off in 1939.

Previous < After the War Between the States