THE LIFE & TIMES OF MAHONE’S TAVERN 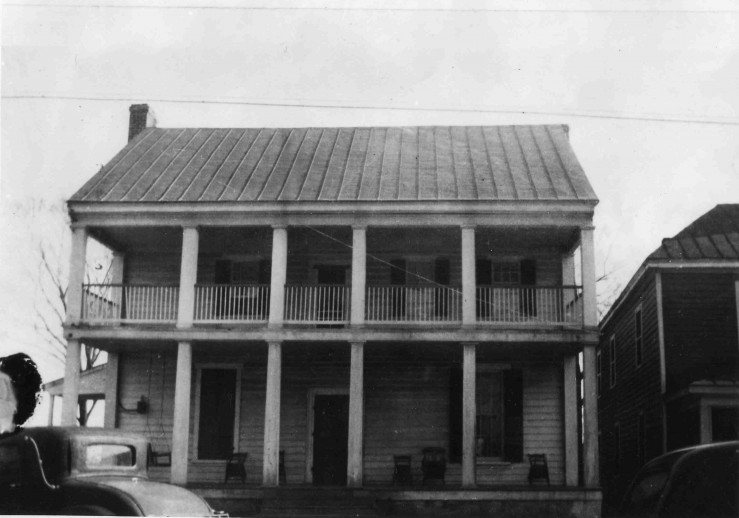 Mahone’s Tavern has witnessed and been a part of much of the history of Southampton County, Virginia.  Built on one of the original lots (Lot #18) of Jerusalem in 1796, it is possibly the oldest house in present day Courtland and is one of the oldest houses in Southampton County.  Its size and location contributed to its function, similar to that of other 18th century taverns, as a political, transportation and social hub of everyday life.

Located directly across from the site of the first and present courthouse and jail, the Tavern was always a political gathering place during normal times and a focal point during Court sessions and other extraordinary events.  Not only did it border on the Courthouse Square and Main Street, but it also sat on the eastern approach of the old Nottoway River Bridge.  In addition, it served as a stage coach stop for the Old Plank Road connecting South Quay to Richmond.  Thus, from the beginning in 1796 up until 1901, most of the judicial, commercial and agricultural business of the county was conducted in or around the Tavern.

According to tradition, the county gallows were located across the street.  Since the courthouse and jail yard were surrounded by a high fence, the top porch of the Tavern afforded the best view of a hanging.  On hanging days, the Tavern would be crowded and seats were set up on the top porch for patrons to view the execution.

The traditional view of Mahone’s Tavern during the 19th century was of a place where travelers, politicians, farmers and local citizens gathered.  The women were usually left at home since cards, drinking and betting on horses were the favorite pastimes of the day.  The Tavern was the focal point for political rallies, trials, hangings and just plain high spirits during most of its first 100 years.

During the 20th century, the house led a quieter existence.  With the transition from a tavern to a private residence, Mahone’s Tavern has become just another home in a quiet little town, although with a more colorful past than most.