William Mahone was interred in the family mausoleum in Blandford Cemetery in Petersburg, Virginia.  His widow, Otelia, lived until 1911 and was interred alongside him.  The mausoleum is identified by the General's well known monogram, the initial "M" centered on a star inside a shield. 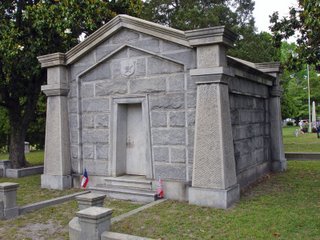 Otelia and William Mahone's first home in Petersburg, originally occupied by John Dodson, Petersburg's mayor in 1851-52, was on South Sycamore Street.  That structure now serves as part of the Petersburg Public Library.  In 1874, they acquired and greatly enlarged a home on South Market Street, and it was their primary residence thereafter.  Virginia State University, which he helped found as a normal school, is a major community presence nearby.

A large portion of U.S. Highway 460 in eastern Virginia (between Petersburg and Suffolk) parallels the 52 mile tangent railroad tracks that Mahone had engineered, passing through some of the towns he and Otelia are believed to have named.  Several sections of the road are labeled "General Mahone Boulevard" and "General Mahone Highway" in his honor.  A monument to Mahone's Brigade is located on the Gettysburg Battlefield. 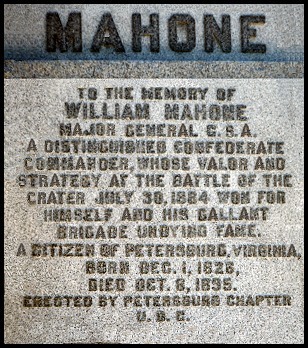 The site of the Battle of the Crater is a major feature of the National Park Service's Petersburg National Battlefield Park.  In 1927, the United Daughters of the Confederacy erected an imposing monument to his memory.  It stands on the preserved Crater Battlefield, a short distance from the Crater itself.  The monument states:

"To the memory of William Mahone, Major General,

whose valor and strategy at the Battle of the Crater,