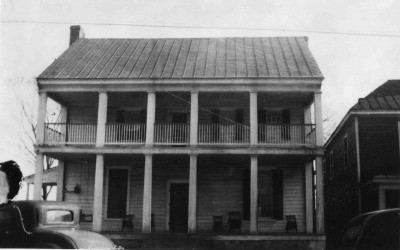 "Mahone's Tavern" was one of the first buildings constructed following the 1791 incorporation of Jerusalem (renamed Courtland in 1888).  Jerusalem was incorporated in 1791 by act of the Virginia General Assembly.  The original portion of the present day building was constructed by Thomas Hunt and Henry Adams in 1796.  According to existing Southampton County Court records, on May 15, 1797, a motion was granted to Mr. Hunt and Mr. Adams to "keep an ordinary" at their house in the town of Jerusalem.  Mahone's Tavern, built on one of the original lots (Lot #18) of Jerusalem is a two-story, three-bay, gable-roofed, wood framed Federal style structure over a brick raised basement, with a gable roof of standing seam metal and two exterior chimneys. Both floors have a hall and parlor plan.  The windows on the front elevation have thick wooden sills and frames.  The first story of this elevation is pierced by two symmetrically arranged six over six, double hung sash windows.  The second story of the front elevation has smaller six over nine double hung sash windows.  There are no windows on the gable ends of the house except at the attic level, which has small flanking windows on either side of the exterior end chimneys.  The rear windows are historic, though of a later date than those on the front.  The chimney on the east side is original and only recently was repointed.  The west chimney collapsed and was rebuilt in the 1930s.  The raised basement, entered through an attached shed on the east elevation, has a dirt floor and has six feet of headroom.  The structure is supported by large hand-hewn pine timbers and the foundation is brick laid in Flemish bond. To the west, the lot is bounded by what was once known as "Hart's Tavern", currently known as the "Bell House", and there is less than six feet between them, as they were once joined by a corridor added by Fielding Mahone in the 1840s.  When the buildings were sold separately in 1901, the "hyphen" was removed.  Evidence of the passage still remains in the main parlor of the Tavern today.

The west room on the first floor is the most elaborate in detail as it reflects elaborate Federal style craftsmanship.  The original pine floors run east-west.  The baseboards and door and window trim are crafted in the Federal style.  This room has thirty-four inch wainscot panels above the baseboards and hand-carved dentil molding.  The original mantle in the west room remains.  A reflection of the Federal woodwork throughout the house, the fireplace frontispiece is flanked by fluted pilasters on a block plinth.  The east room has been enclosed in a modern brick wall that covers the entire east facing wall.  A thirty-eight inch six panel door is located in the northeast corner of this room, providing access to a small gable roofed side porch.

The two attic rooms measure eighteen by seventeeen feet.  The roof framing system is made up of hand-hewed pine rafters that are mortised and tenoned, pegged and set on twenty-inch centers.  They have collar beams and Roman numerals numbered north to south carved into each rafter.

The house is constructed of “heart” pine using wooden dowels and hand forged nails.  The floor supports are large pine timbers (14” x 10”) still in perfect condition.  The weatherboarding on all elevations, columns and cornice are all preserved under aluminum siding.  Although one of the two original chimneys collapsed and had to be reconstructed, the remaining 18th century chimney still stands on the north side of the house.  The original part of the house consists of three stories with two rooms on each floor.  The rooms are spacious, averaging approximately 21 feet by 21 feet with 10 foot high ceilings.  There is also a full basement with a dirt floor under the main part of the house.  Much of the original construction is evident in such features as the chair rails in the rooms, the wide wooden wainscoting, the “dentil work” molding around the ceilings, the brackets used to bar the doors, and the stairwell with steep, narrow stairs.  The entire construction is an excellent example typical of 18th century craftsmanship.

The back of the house was enlarged by connecting the outside kitchen to the main house with another room in 1933.  The upstairs and downstairs bathrooms were, of course, added later.  Throughout most of its history, the house had a double front porch, but the upper porch was removed and the number of columns reduced from six to four in 1956. The remainder of the original house, however, remains basically as built and in excellent condition.

It is not currently known what outbuildings may have been present historically. however, the tavern's history would indicate that there is potential for archaeological deposits on the site.

Next > Vaughan's Tavern and the Nat Turner Insurrection