William Mahone (December 1, 1826 – October 8, 1895) was born in Monroe in Southampton County, Virginia to Fielding Jordan and Martha (nee' Drew) Mahone.  Beginning with the immigration of his Mahone ancestors from Ireland, he was the third individual to be named “William Mahone”. He was not given a middle name, as evidenced by records including his two Bibles, VMI Diploma, marriage license, and Confederate Army Commissions. William and Otelia’s first born son was also christened “William Mahone”, with the suffix “Jr.” being added later in his life during a period of similar cultural naming transitions in Virginia.

The little town of Monroe was on the banks of the Nottoway River about eight miles south of the County Seat at Jerusalem, which was renamed Courtland in 1888.  The river was the important transportation artery in the years before railroads and serviceable roads were available in the area. Fielding Mahone ran a store at Monroe and owned considerable farmland.  The family narrowly escaped the massacre of many local white families during the Nat Turner Slave Insurrection of 1831. 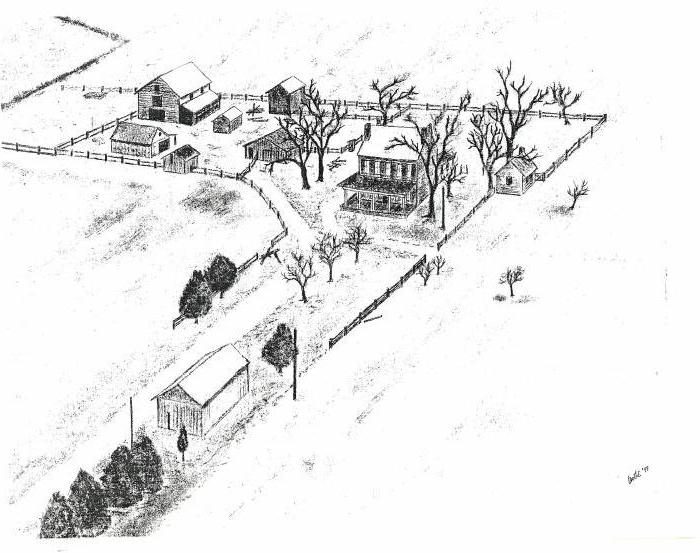 Sketch of William Mahone’s Birthplace at Monroe Bridge, Southampton County, Virginia. Probably made in the 1900s, as evidenced by the electric poles going to the house.

The local shift of primary transportation in the area was from rivers to the new technology emerging with railroads in the 1830s.  In 1840, when William was 14, the family moved to Jerusalem where Fielding Mahone purchased and operated a tavern across from the County Courthouse. As recounted by his biographer, Nelson Blake, the freckled-faced youth of Irish-American heritage gained a reputation in the small town for both “gambling and a prolific use of tobacco and profanity”. It has been purported that during a “high stakes” card game, Fielding Mahone was losing a large amount of money when called away from the game. Young William took his father’s place at the table and when his father returned, had recouped all his father’s loses – along with a horse and funds sufficient for William to attend VMI.

Young Billy Mahone gained his primary education from a country schoolmaster, but with special instruction in math from his father. As a teenager, for a short time, he transported the U. S. Mail by horseback from his Jerusalem to Hicksford, a small town on the south bank of the Meherrin River in adjacent Greenville County. Hicksford later combined with the town of Belfield on the north bank to form the current independent city of Emporia.  William was awarded a spot as a “state cadet” at the recently opened Virginia Military Institute (VMI) in Lexington, Virginia. Studying under VMI Commandant William Gilham and a professor named Thomas Jonathan Jackson, he graduated with a degree in Civil Engineering with the Class of 1847.